Gift economy: What is it and why?

St Columba’s Farm at Chanctonbury represents a Gift from God, a place of ‘starting over’. The land is to be given new life, the buildings resurrected and repurposed, the people… well, what about the people? How do we organise ourselves within such a place of renewal? What does our ‘socio-economy’, or the way in which we order ourselves, at St Columba’s look like if we start again?

Given that the human species emerged fairly recently in geological terms into a pre-existing socioeconomic order, which we call nature today, it seems fair to begin here. When we look through a Christian perspective we see that God had a relationship with his creation before humans entered the world (see Job 38-39, or many of the Psalms), and that when humans emerged, they were to join in with this existing sociality (Scott, 2003). These two elements of how nature is ordered and a pre-existing relationship between God and his creation perhaps holds the clues to an appropriate economy at Columba’s Barn.

1. The order of life – economic system as biosphere

Earth has an interrelated order of life. Both organic life and non-organic matter (such as rocks, or the carbon cycle for example) are so intricately intertwined and organised that the whole biosphere can be thought of as one living unit. The biosphere is made up of ecosystems of all scales, such as vast forests and oceans, or the small pond and shrubs in your garden. The official definition of an ecosystem is that it consists of “a dynamic complex of plant, animal and micro-organism communities and their non-living environment interacting as a functional unit” (United Nations, 1992, 3). This means that the Earth has been designed in a way that every organism needs other organisms and their non-organic environment to live. No organism can live in isolation.

Ecosystems hold a myriad of interactions and processes which keep the ecosystem functioning in space and in time. A fully functioning ecosystem is resilient to the pressure of changes brought on naturally or by human development and is able to adapt, even if some of the species change or evolve over time. However, if the pressure is too intense in space (over a large area) or time (happens over long period of times) these interactions are broken and the ecosystem cannot adapt. For example, the use of chemicals in agriculture which have caused a decline in insects and which mammals and birds rely on for food, have resulted in the decline of some bird species in the UK. If field hedgerows are also removed to increase the land available for crop growing, as is common practice, whole ecosystems are destroyed, which then may impact on neighbouring ecosystems as the species who once used the hedgerow invade other areas.

At a global scale, the impacts of climate change on some ecosystems shows how interrelated the biosphere is. The message is that the economic order of life on Earth is relational, and that humans, having emerged into this pre-existing order of life, are as integral to the ecosystem as any other species.

2. God has a relationship with his creation drawing it to its completion

In Christian theology, God created the world and has a relationship with each of his creatures. The Son embedded eternity in the world through his incarnation and gave his life so that all can be reconciled to God (Colossians 1:20). The Spirit, understood in theological scholarship as the origin and giver of life (eg. Pannenberg, 1998, 1), continues this work of reconciliation constantly renewing all of life so that the whole of creation can come to its fulfilment at the end of time. This is the eschatological work of God, drawing creation to its perfection when all of life flourishes in the kingdom of God.

The Trinitarian life of God is the framework which illuminates the way in which a sociality might exist if we were to start over. According to the eminent theologian Wolfhart Pannenberg, the three persons of the Trinity are in relation with each other and share in mutual love: the giving and receiving of love in eternity (Pannenberg, 1998). As the biblical writer, John, states: God is Love (1 John 4:8). This reciprocal love is the framework through which creation was designed and through which God is reconciling his creation towards himself. As such the foundation of the life of planet Earth, and its overall eschatological direction, is love.

Life on Earth exists within a Trinitarian framework of mutual gift and reciprocity, with the work of the Son and the Spirit enabling all of creation to have a relationship with God, individually but also in relation with each other, as a community of Earth, the biosphere. The Spirit gives life, and the Son has given, through grace, the ability for humans to enter into the same invitation of the existing order of life.  Love, then is the foundation of life, manifested as gift.

Therefore, the framework of all of life on Earth is relational, sustained through the strength of these relations on Earth and in relationship with the life-source and sustainer, the Spirit of God. What must be understood is that God has created human life within his relational economic order, the ecosystem, not outside of it. The modern world views humans as ‘outside’ of nature, allowing us to believe that we have no moral responsibility when we use and exploit the variety of life on Earth for our own wellbeing, and we have constructed an economy which replicates this attitude.

Yet any economy constructed on such a basis is artificial and risks breaking apart the very order of life which sustains the Earth, such as we see happening as a consequence of the globalised capitalist economy in modern times. Such an artificial economy has to be seen as the ‘alternative’ way, outside of the actual order of life, which has been created and already given to us, if only we can receive it.

The most appropriate way to organise ourselves in harmony with the pre-existing order seems to be through a relational economy, perhaps one manifested as gift using the Christian perspective of the framework of the Trinity. The first step of this gift economy, therefore, is to understand our human place in the world, as part of the interrelated and dynamic biosphere, made up of smaller ecosystems interacting with each other and containing life in all its forms. This myriad of life, all relating to each other, stands in relation to its creator, a trinitarian God who has given, and continues to give, all that is needed for the provision of life. Although human life is more complex and our needs are greater, our economy should fit into the interrelated order already in place on Earth, and which we humans have emerged into.

In our complexity we have been given the responsibility to nurture all of the life we live with, human and non-human. This means the way in which we relate to each other in our economy should enable strong relations between people and strong interactions within ecosystems, reconnecting to our ecosystems, understanding the needs of some species, and nurturing the Earth community in which we find ourselves, so that all of life flourishes in every locality. A relational order of life is, therefore, about building and deepening relationships so that the other flourishes within their context of the Earth community. Essentially the gift economy is about allowing every living thing to live out their true identity in relation with each other and before God.

Understanding the human place in the world and how that relates to God allows us to be humble. Humility is the second step towards a gift economy. Humility is a gift helping us to accept our finitude in relation to God and to accept and receive the gifts of life and all that is provided for life to be sustained. God wishes us to be in community, not just to alleviate loneliness, but because a community where the relationships are prioritised is one which will endure and flourish, the goal of God for creation.

Love manifested as gift allows a person to be outward looking, and counteracts the propensity of humans to be self-orientated. The gift economy prioritises relationships, always seeking to nurture the other. When there is agreement between people in community that they will invest themselves in each other, rather than an artificial economy, all needs are understood and met over time, whether physical, mental, emotional or spiritual. A joyful, generous, and open culture is created in such a community, where all of life is enabled to grow into the full identity given to them by God without conditions, judgement, competition or a need to assert themselves.

As the developing community at St Columba’s in Chanctonbury grows, our economy, or how we organise ourselves, needs to reflect the essence of ‘starting over’. It would be a place where the world and its artificial economy is left behind, as one moves into a space of humility and renewal, where relationships are prioritised. It will require humility, courage and conviction, and it cannot be done in isolation. We are created to be in community giving ourselves in love to others in order to nurture the whole. As Pope Francis says in his encyclical Laudato si’ – on care for our common home (2015), without a renewal of interpersonal relationships there can be no renewal of our relationship with nature. This is where we find the flourishing of life.

Dr Rachel Bathurst completed her PhD with the University of Manchester in 2019, which theologically investigates how international and national institutions implement sustainable development especially with regards to halting the loss of global biodiversity. Prior to this she has worked as an ecologist around the world and in the UK, following a MSc in Environmental Biology, but has spent most of her career as a national specialist and thought leader in the UK civil service. She has extensive knowledge and experience in UK and international policy and strategy on the interaction between economic development and the natural environment in roles related to planning and development, climate change and renewable energy, and sustainable development.

Rachel has also trained and served in church leadership as a Licensed Lay Reader for the Diocese of Chester in the Church of England. Rachel is currently a Senior Tutor for the online diploma course, Christian Rural and Environmental Studies developed by the John Ray Initiative, and a member of the Future Ethics network with the think tank the William Temple Foundation. Having published an early paper (Beyond Sustainability: Hope in a Spiritual Revolution. 2017, Global Discourse, 7:1), she is also working towards publishing her PhD.

The Society St Columba is a Celtic New Monastic community located at St Columba’s Farm, Chanctonbury in West Sussex, England. As a Christian community we are seeking to outwork a simple spiritual rhythm or lifestyle, that consists of PRAYER, WORK, READING, PILGRIMAGE, SILENCE, SABBATH and investing into the geographical PLACE (Chanctonbury). St Columba’s Farm is an early 19th century heritage farmstead with an adjoining 23 acres of land. Here we are seeking to outwork the vision of the Kingdom of Heaven on earth in its fulness – humanity and creation working in harmony together under God. 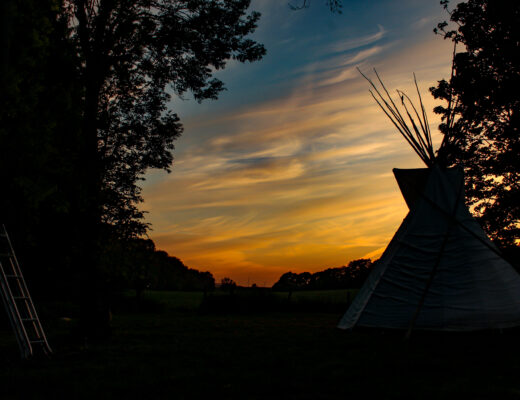